Medieval and Renaissance Studies: Manuscript Facsimiles in the UT Libraries

Guide to sources for Medieval and Renaissance Studies.

Cantigas de Santa Maria.   SC Oversize: ML96.5.A54C3 1989.
Songs and music in Spanish written in the 13th century by the scribes of Alfonso el Sabion and illuminated by the artists at his court.  From the National Library in Florence.

Douce Apocalypse (Bodleian Library, Oxford, Ms. Douce 180). 2 vols. SC: BS2825 .B59 1981.
Commissioned by British monarch Edward I and wife Eleanor of Castilia-Leon in the 13th century.  One of the most siginificant manuscripts of the time period.  Illuminated by 97 miniatures. Second volume is a commentary.

Beato de Turin. 2 vols. SC Oversize: ND3361 .R5 B43 2000.
From the 12th century and written in Carolingian script. Illustrated with 106 miniatures. Copy of commentary on the Book of Revelation written by the monk Beatus of Lièbana, Spain in the 8th century.

De Virginitate Sanctae Mariae (Parma Idefonsus). Ms. Parm. 1650. 3 vols. SC: ND3385 .I44 2010.
Illuminated manuscript from Cluny from around 1100 A.D. Treatise was originally written by Saint Ildefonsus. Now located in the Biblioteca Palatina of Parma.  Volumes 2 and 3 are commentary in Italian and English.  Includes CD of PDF version of manuscript.

Processus Contra Templarios.  2 vols. SC Oversize: KJV131 .T46 P76 2007.
From the Vatican Library.  Text of documents relating to the trial of the Templars for heresy in Potiers, France from 1307-1314. It includes the minutes of the trial, published by the papal commissioner Bérenger Frédol, two testimonies of Jacques de Molay, the last Grand Master of the Knights Templar, the testimony of several Templars given in front of Pope Clement V, and Clement V’s absolution given to the Templars.  Volume 2 is Italian translation.

Biblia Pauperum; Apocalypsis.  SC:  BT225.B5 1977.
Facsimile of the Weimar manuscript of the Biblia Pauperum and the Apocalypse, from  Zentralbibliothek der deutschen Klassik, Weimar from the 14th century.

The Cloisters Apocalypse.  2 vols. SC: BS2822.5.C58D48.
14th century manuscript written by an unknown author on the Greek island of Patmos of N.T. Book of Revelation. 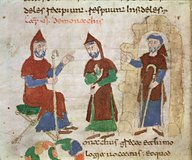