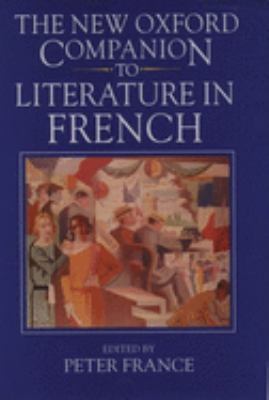 The New Oxford Companion to Literature in French

The New Oxford Companion to Literature in French is far more than a simple revision of the original Oxford Companion to French Literature, published in 1959, and described by The Listener as the `standard work of reference for English-speaking enquirers into French literature'. As the changein title implies, this completely new work presents an authoritative guide not only to ten centuries of literature produced in the territory now called France, but also to the rich literary output of other French-speaking countries around the world. The scope of the Companion is deliberately open and inclusive, challenging and extending the traditional canon. Literature is understood in a broad sense, ranging from strip cartoon and pamphlet to tragedy and epic, and particular attention is devoted to francophone writing from outside France.Written by an international team of specialists, entries cover individual authors and works - over 3,000 of them - from the troubadours to Cesaire, and from La Princesse de Cleves to La Vie mode d'emploi. Each is discussed in detail within their historical, cultural, and intellectual context. Among the new features of the Companion are the substantial essay-entries, reflecting up-to-date scholarship and theoretical debates on topics such as: - literary movements and genres - historical subjects such as chivalry, or Occupation and Resistance in wartime France - movements of thought from Scholasticism to feminism - linguistic topics - the sciences - the arts and media, including opera, cinema, and press As a divertissement for readers, an entry on `Quotations' lists 100 well-known quotations from the canon of French literature. Adventurous and wide-ranging, The New Oxford Companion to Literature in French will be an indispensable and hugely enjoyable reference work for all scholars, students and general readers.