This guide highlights research materials in Special Collections related to the Spanish Flu at the University of Tennessee in 1918.

When the Spanish Flu* arrived in Knoxville in the fall of 1918, the University of Tennessee was heavily involved in the war effort of WWI. Total student enrollment had been cut by more than half due to the ongoing war, with only 589 students left on the Knoxville campus. Many campus records from this time focus on the war effort as campus activities and events like homecoming were either placed on hold or replaced with war collecting drives or other activities that promoted aiding the war effort. Even football was canceled, as most of the players had been called into military service. 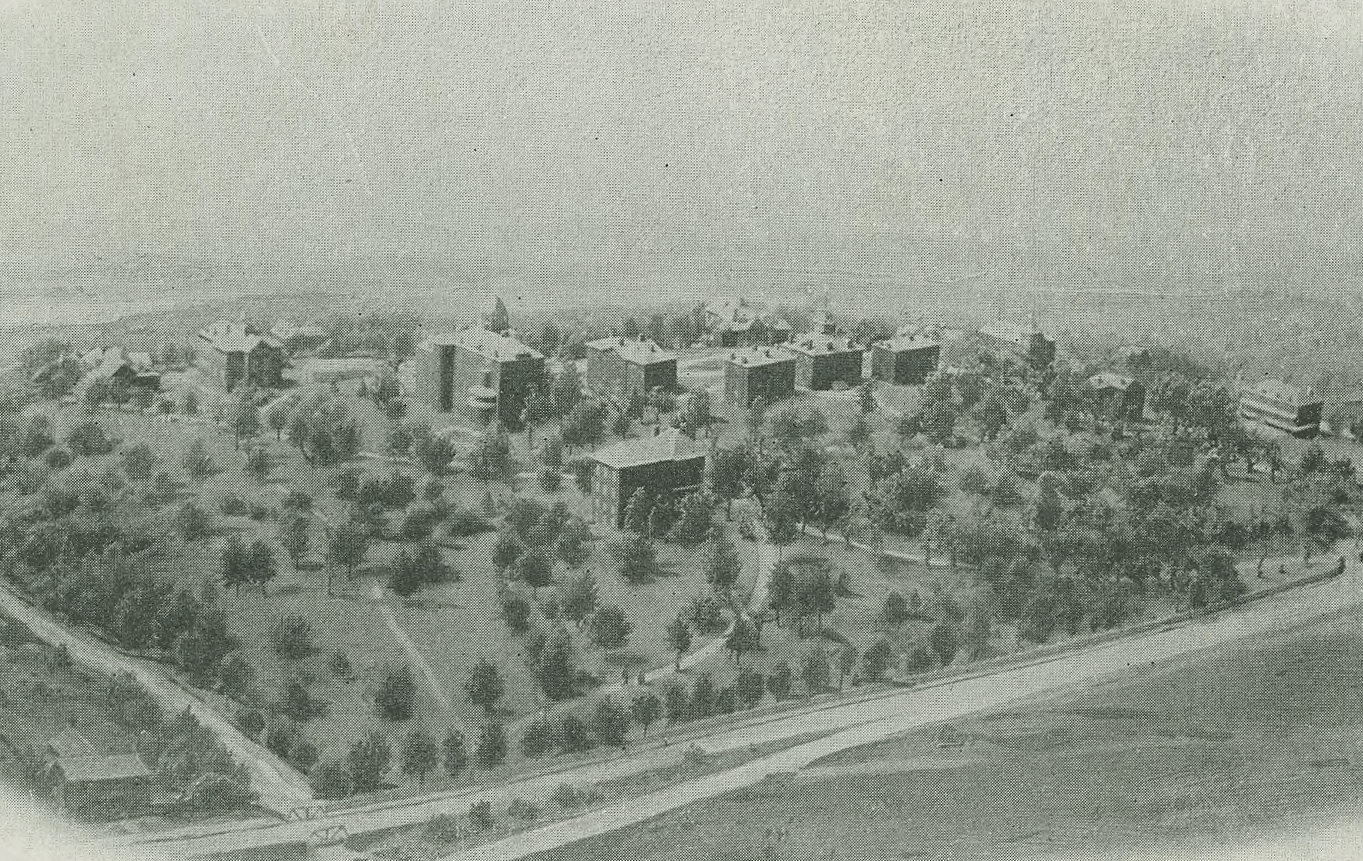 Images of the Knoxville Campus from The Volunteer, 1920

The Volunteer Yearbook, like many other campus activities and traditions, was placed on hold in 1918 and left unpublished.  However, the 1920 Volunteer Yearbook features images of campus buildings and views, with a larger illustration of the entire campus. Invaluable sources for learning more about the university and campus life can be found in Volopedia and the Volunteer Yearbook Digital Collection. 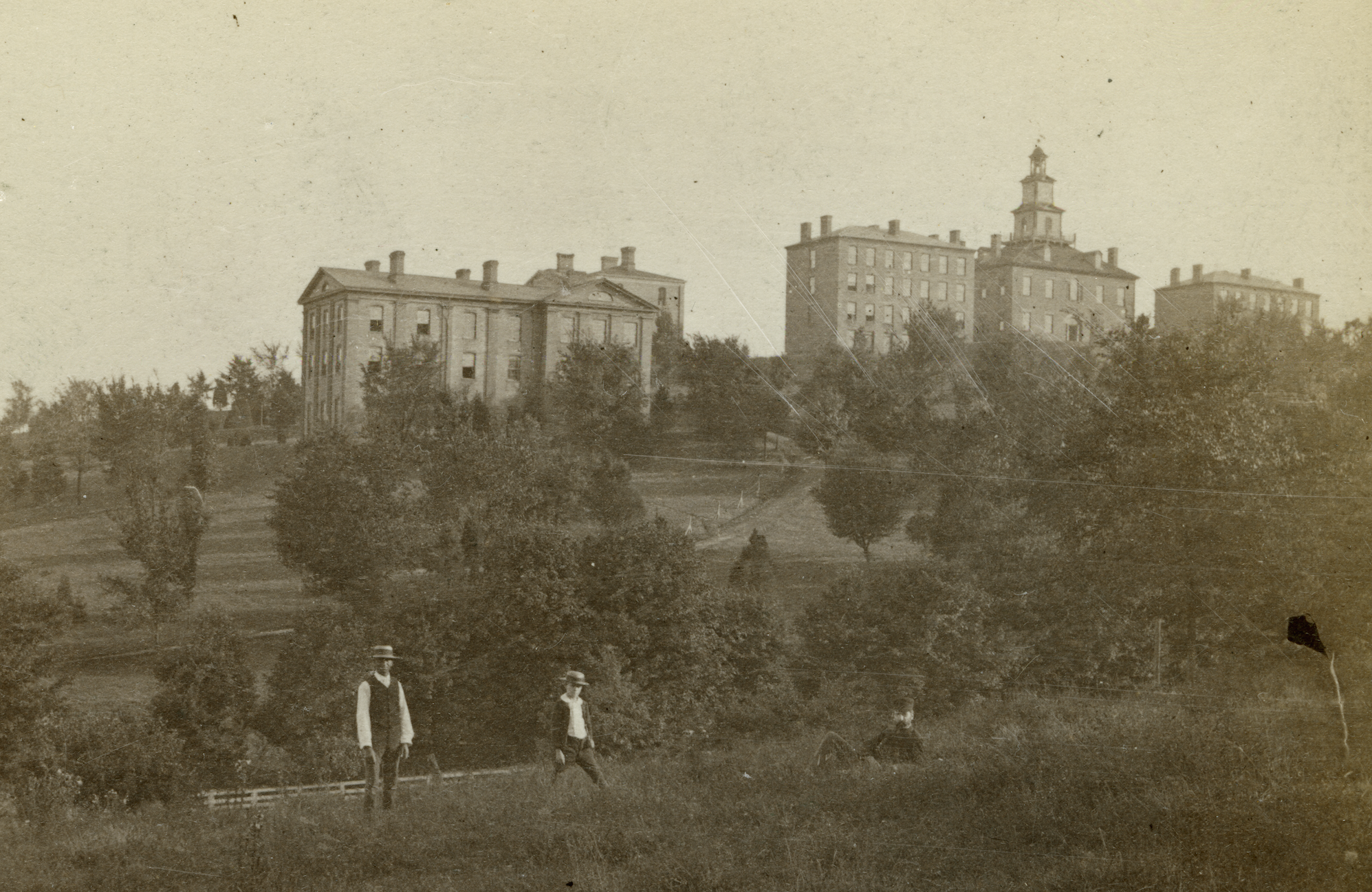 View of students on the "Hill" at the  University of Tennessee, Knoxville, which  during this time was named East Tennessee  University. Visible buildings include North  College, South College, and Old College.

From the Images of East Tennessee Digital  Collection.

Arrival and Spread of Spanish Flu

During the Spring and Fall of 1918, the University of Tennessee, among many other public universities, participated in a program called the Students' Army Training Corps (SATC).  Between April 15 and November 1, 1918, UT trained over 1,500 men.

In October 1918, influenza began to proliferate through the training encampments. Cases among the soldiers and subsequently, the public, rose so high that Reese Hall was converted into a military infirmary, alongside another infirmary located at an additional SATC training encampment at Chilhowee Park. The Reese Hall infirmary housed 47 patients sick with the Spanish flu, many of whom were on campus as part of the SATC.

Images from the Office of the Historian Collection AR.0015, seen below, give us a glimpse into that time as well.

Local newspapers from the fall of 1918 reported on influenza infection and death rates, alongside advice for what to do in cases where someone caught influenza.  Public notices warned citizens to seek open air and avoid anyone demonstrating symptoms of the Spanish Flu. Restrictions to public gatherings came in the form of public notices in the mail and published in newspapers. Public schools, including the university, remained open, but most public social gatherings were restricted from October through early November.

This county-issued broadside informs citizens of Sevier County, Tennessee of ways to stop the spread of influenza. The broadside notes that the flu "is now sweeping over the United States and claiming its hundreds by such complications as pneumonia" and that "it has at least reached out county."  From the Volunteer Voices Digital Collection. 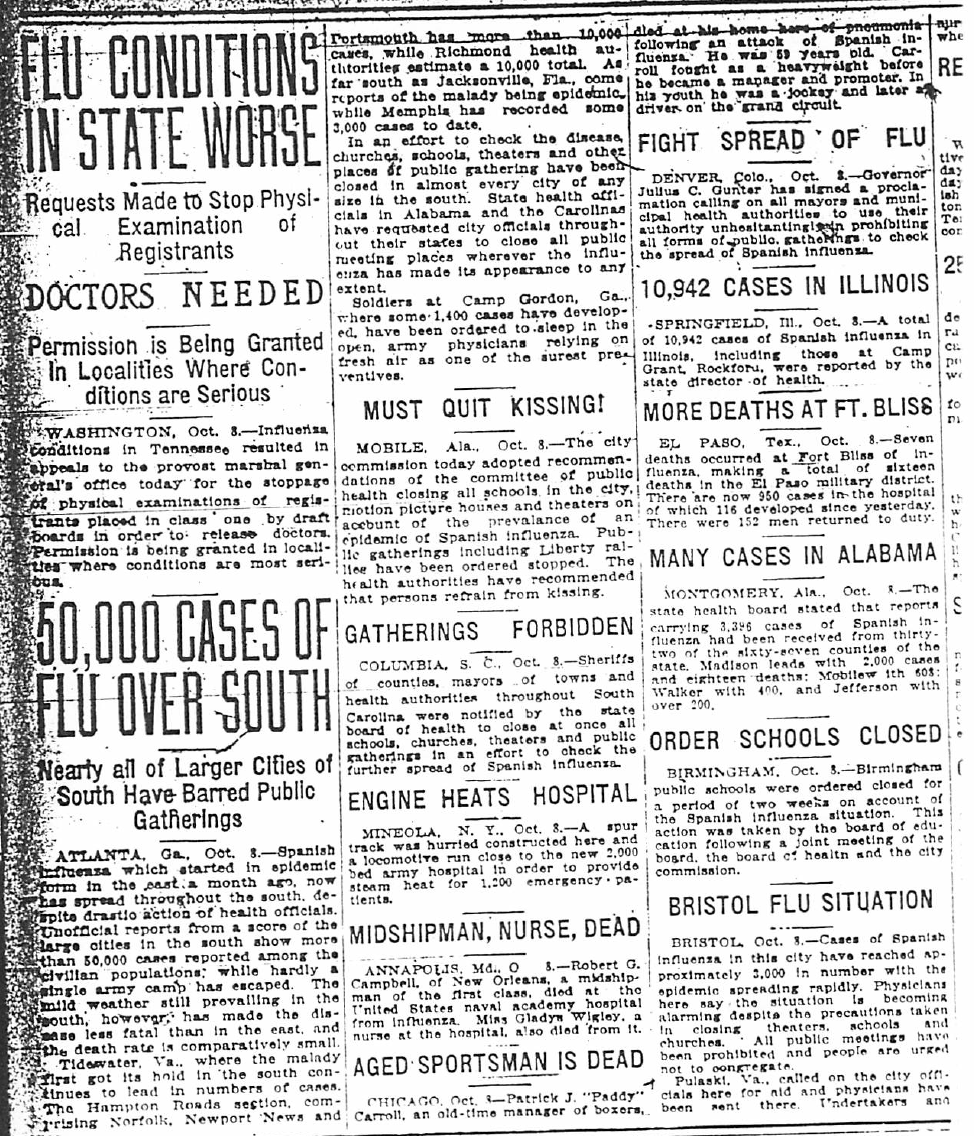 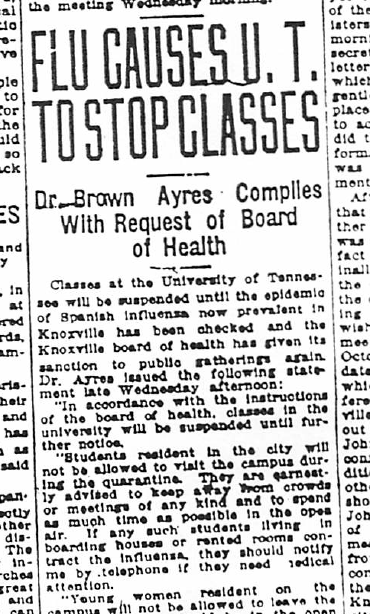 Flu Causes U.T. to Stop Classes/Dr. Brown Ayres Complies With Request of Board of Health 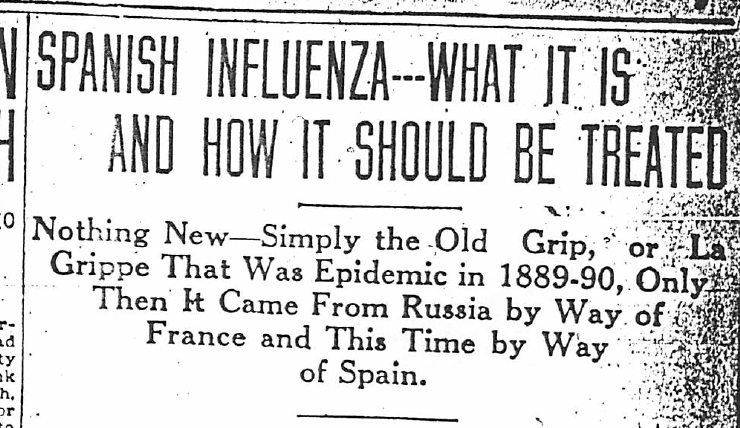 Spanish Influenza---What It Is and How It Should Be Treated

Spanish Influenza---What It Is and How It Should Be Treated 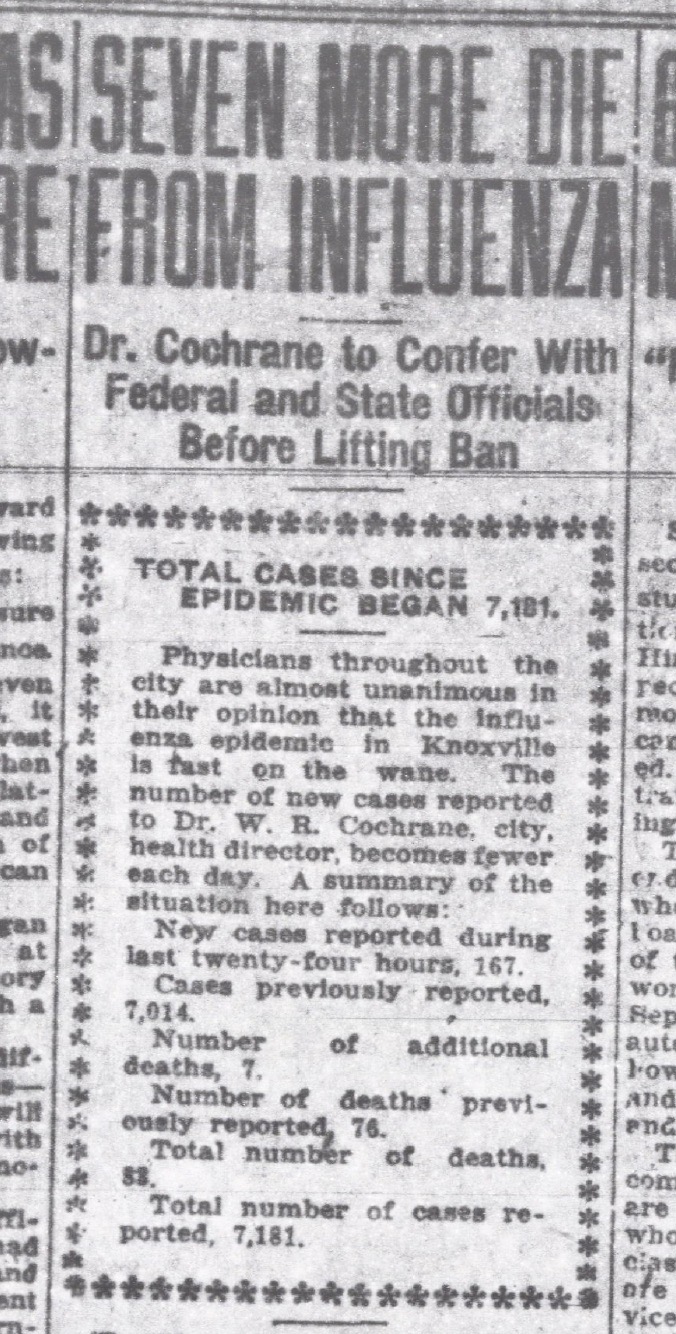 Seven More Die From Influenza/Dr. Cochrane to Confer With Federal and State Officials Before Lifting Ban

Advertisements for cold cures and commonly used flu remedies were common alongside newspaper articles and Influenza updates. Many of these products would have been bought at local pharmacies.

This ledger, which contains flattened boxes of products sold by Robinson Apothecary, of Memphis, TN, in the early 20th Century, features several products advertised in local newspapers as treatments for influenza or the Spanish flu. From the Volunteer Voices Digital Collection.

*The "Spanish Flu" is a misnomer for the 1919 influenza pandemic. The flu did not originate in Spain, but since influenza outbreaks overlapped with WWI, much of the "bad news" was not published in many of the participating countries' newspapers, as part of a strategy for hiding any internal weaknesses. Spain, a neutral party, had no need to strategically hide its vulnerabilities, so most flu news from abroad came from Spain, associating the country with the spread of the virus, and forever marking the influenza of 1919 as "Spanish Flu."